During the 30 years of operation, the Civil War Days committee has engaged the finest historians, educators, and musicians from all across the United states. Visitors were able to be a part of our history and to gain understanding as to what life was like during this terrible conflict in our nation. For as the philosopher George Santayana said, "Those who cannot remember the past are condemned to repeat it."

We wish to express our appreciation to those re-enactors, artists, sutlers, vendors, sponsors, and the visitors who have participated in our event, and for their support during the last 30 years. We are grateful for the friendships we have formed and for those who have assisted in making Pipestone Civil War Dyas one of the most authentic, educational, and entertaining Civil War re-enactments in the Upper Midwest.

As one of the most enduring and respected events of its type in the upper Midwest, Pipestone Civil War Days is a tribute to our past. Set in a beautiful historic setting visitors are invited to interact with civilian and military reenactors to share some of the flavor of the 1860's with them. Reenactors, or living historians, from around our nation, recreate scenes of daily life from the home to religion to education to military camps. Events throughout the weekend include educational programs, etiquette and ballroom dance lessons, camp tours, children's games, a Grand Ball and much more! The roar of the cannon, the smell of gun powder, and the work of our reenactors, performers, and other participants make a full immersion in the 1860s possible.

For more information on how you can get involved, please contact us at PipestoneCWD@gmail.com.

The Pipestone Civil War Days are hosted by the 13th U.S. Infantry Regiment, Company D. and made possible in part by a grant from the Southwest Minnesota Arts Council with funds appropriated by the State Legislature.

For all questions regarding the event email us:
PipestoneCWD@gmail.com

For more information or to stay up to date with PCWD news become a fan on Facebook.

Now you can find us on Instagram as well. Simply search for Pipestone Civil War Days.

The stories below report brief excerpts about our local soldiers.

All information is taken from the publication "And What Nobler Purpose..." Civil War Veterans and Pipestone County" 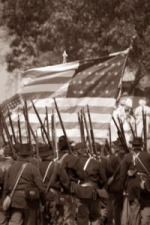 The Ed S. McCook Post of the Grand Army of the Republic was organized in Pipestone early in 1884. There was considerable enthusiasm at the first meeting. The 45 charter members elected the following officers: Commander, John Pearson; Senior Vice-Commander, Riley French; Junior Vice-Commander, M. J. Easland; Surgeon, W. J. Taylor; Chaplain, W. D. Peck; Officer of the Guard, George D. Green; Adjutant, C. W. Fenalson; Quartermaster, W. B. Brown, Quartermaster's Sergeant, B. S. Clark. It was soon discovered that the name "Ed S. McCook" had been selected by another post. The local post was then renamed "Simon Mix Post" honoring Colonel Simon Mix, a member of the 3rd New York Cavalry, who was killed in action with his regiment at the battle of Petersburg. The new post was mustered on May 1, 1884, by Sheriff R. R. Miller, Department Mustering Officer from Worthington, MN.

The Simon Mix Post #95 was for many years ranked highest in membership and influence in southwestern Minnesota. Members of the G. A. R. chapter included Pipestone's earliest pioneers, city fathers, and other prominent members of the community. Two of them, Charles Bennett and Daniel Sweet, were among the first settlers in Pipestone County. After an existence of fifty years, Simon Mix Post #95 ceased activity on May 1, 1934. Warrington B. Brown appeared before the Board of County Commissioners to inform them that the Post would no longer require a meeting place in the courthouse.

The Post had been kept alive through the sole efforts of Commander Brown. Although there were two members still living, James Hendron of Woodstock, who had transferred his membership to Pipestone's Post after Woodstock's had disbanded, had not been able to attend meetings for a long time. Warrington had declared several years earlier his determination to keep the organization active until it had rounded a full half-century. He continued to hold regular "meetings" with only himself in attendance. He called the sessions to order, conducted whatever business was at hand, and adjourned. James Hendron died May 18, 1934, less than three weeks after the Post ceased activity. Warrington Brown died in 1937. Flags, pictures, and chairs belonging to the post were presented to the Women's Relief Corps, and some relics were given to the Pipestone County Old Settlers' Society. The framed charter of the post was retained and is now housed in the Pipestone County Museum along with other G.A.R. artifacts. 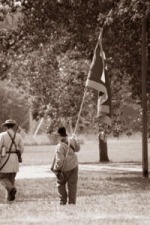 The U. S. Grant Post was the first G.A.R. post organized in Pipestone County. There are no existing records of the organization, but "one liners" in the early newspapers indicate that it was active as early as June, 1883. The roster eventually carried more than sixty names. George D. Dodd was the first Commander and Henry Hoye was the first Adjutant. The Edgerton Enterprise of June 28, 1884, carried a long article on the campfire rally held in Edgerton on June 25. According to the Enterprise:

"..the heavy morning rain did not dampen the enthusiasm of the reported 1,500 visitors. A brass band from Pipestone participated, as did post members from Pipestone, Adrian, and Luverne. L. S. Nelson, attorney from Adrian, was the main speaker, and C. C. Goodnow responded. The rest of the afternoon was spent at the race track. "At early candle lighting the camp fires were set ablaze," and the activities such as storytelling and singing continued until 10 p.m. Feasting and dancing then began in the schoolhouse, and "continued and lagged not a whit until broad day-light."

In October 1885, the G.A.R. posts of Pipestone, Woodstock, and Edgerton were organized as the Pipestone County Battalion. The Women's Relief Corp in Edgerton wished to honor those who died in the Civil War. In April 1910, they erected a monument in honor of the war's "Unknown Dead." This monument stands in Edgerton's Hillside Cemetery. No more fitting tribute can be given these men, known and unknown, than that which is inscribed in part on this monument: "Let us ever keep in mind their patriotic devotion, for greater love hath no man than this, that lay down his life for another, or his country." 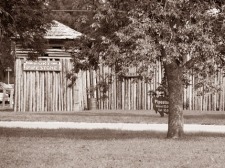 Stephen Miller, Minnesota's "War Governor," came to Minnesota in 1858 from his home state of Pennsylvania. In 1861, he was offered the position of Captain in the United States Army, which he declined. Arthur P. Rose, in An Illustrated History of Nobles County (1908), wrote:

At the commencement of the civil war, he and his son, Wesley F. Miller, enrolled themselves as private soldiers in the First Minnesota regiment. On April 29, 1861, he was mustered into the service as lieutenant colonel of the First Minnesota. He was commissioned colonel of the Seventh regiment of Minnesota volunteers Sept. 26, 1862, and was made brigadier general of volunteers by the president Oct. 26, 1863. He took part in many of the important battles of the civil war and played an important part in the Sioux war, serving under General Sibley. He was in charge of the forces at Mankato on Dec. 26, 1862, which executed the thirty-eight Indians.

Stephen Miller was elected governor of Minnesota on the Republican ticket in November, 1863, and served until January 8, 1866. From 1871 until 1878, Governor Miller was employed as a field agent for the St. Paul & Sioux City Railroad company, and lived in Windom, MN. In 1878, he moved to Worthington, MN, which was his home until he died on August 18, 1881. He is buried in the Worthington Cemetery.

The Stephen Miller Post #139 was organized on May 21, 1885. That evening, 22 Civil War veterans were mustered in. In 1920, there were still four surviving members. The post disbanded in 1923, when the members numbered only two: James L. Hendron and James Newton Baker, who both then joined Pipestone's post.

PCWD thanks all of our contributors for their investment in our event and our community. Please show your thanks by patronizing these businesses:
- 13th U.S. Infantry Regiment, Company D.

The Pipestone Civil War Days are hosted by the 13th U.S. Infantry Regiment, Company D. and made possible in part by a grant from the Southwest Minnesota Arts Council with funds appropriated by the State Legislature.

**Our insurance policy and the policy of the Hiawatha Pageant grounds does not allow dogs, or other pets on the premises during public events. Service dogs are welcome with appropriate documentation.
**For the safety of everyone at the event, drones are not allowed on site, in camps or in the parking areas.
**Personal Hand Guns and live ammunition are not allowed to be carried on the event grounds due to Pipestone park ordinance.